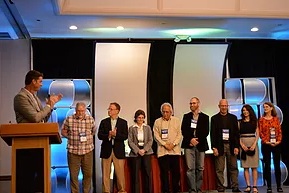 When you think about ISNR’s Board of Directors, have you ever thought about your contacts in the neurofeedback field and said something like this? “I just know that _________ would be great on the board!” Well, if you have, then send in a nomination for them!

We have some amazing clinicians, researchers, educators, and innovators in our field and among our members, and we’d love to see some new faces on the Board of Directors. Think about it, and send in your nominations!

The Nomination Form can be found on the Get Connected page, or you can download it HERE